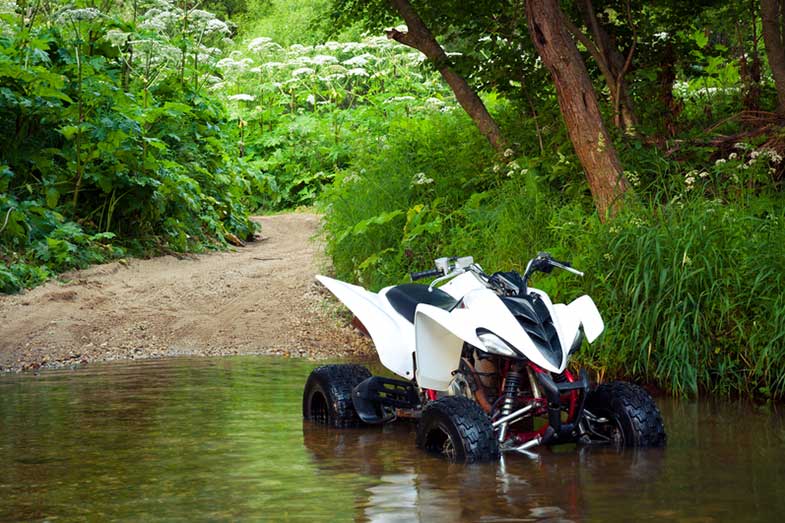 The 2000s were a busy decade for ATVs, and the same can be said for the Yamaha Raptor 350. This mid-bore quad hit the ground running in 2004, effectively competing in top speed and handling. It wasn’t a crowd-pleaser, but for Raptor owners, it was one spectacular machine.

The Yamaha Raptor 350 was a sport and recreational ATV produced by Yamaha from 2004 to 2013. It featured low to mid-range power, superb handling, and racy aesthetics. This four-wheeler was fun to ride and perfect for off-road trails.

This sporty 4×4 remained unmatched in performance, acceptance, and design through its production. Unlike its big-bore sibling, the Raptor 350 enjoyed a successful 10-year production run, only to stop due to the rising popularity of the Raptor 250. There is so much more to discover about the Yamaha Raptor 350 other than specs and known issues. Let this guide enlighten you.

Not Your Basic, Beginner Quad

Introduced in 2004, the Yamaha Raptor 350 was eighth in the mid-bore wheelers manufactured by Yamaha since the creation of the 1987 Banshee. Although not a company-flagship model, it has grown in popularity as one of the few vehicles to occupy the sport-rec ATV niche and its counterpart – the Honda TRX300EX. 4x4s that fall under this category satisfy riders’ searching for a lightweight machine (minus utility racks and selectable 4WD). They’re not as intimidating or pricey as track-ready brutes, but fun and sporty to ride.

The components and overall aesthetic of the Raptor came from two greats – the 2001 660R Raptor and the 2004 YFZ450 – making the Yamaha Raptor 350 a certified head-turner. It is pretty much a scaled-down version of the big-bore four-wheelers that dominated the ATV industry a couple of decades ago. Its big 36-mm BSR Mikuni carburetor provided excellent throttle responsiveness across the vehicle’s entire RPM range. Plus, its ergonomics and low-lying seat allowed recreational and aggressive riders alike to enjoy a healthy, comfortable riding experience.

The Raptor 350 had three different trims and 15 different models through the course of its production until its final year in 2013, namely:

Previous and current Raptor owners love the machine’s engine braking system that delivers reliable stopping ability on diverse road conditions. The quad can also go into reverse from any gear via a convenient shift lever. Airflow to the engine is never insufficient or restricted – thanks to its high snorkel-type intake. Piggyback reservoir shocks with five-way adjustable preload provide a decent amount of rear-wheel travel, translating into consistent performance during rough sport riding.

Other desirable features include an easy-to-use, handlebar-mounted choke lever, six-speed transmission, upgrade-friendly SOHC design, and low-profile tires with plenty of grip. Additionally, the Raptor was one of the first vehicles to sport white plastics – a perfect platform for personalizing the quad through graphics and decal kits. This clean-canvas concept was later adopted by all Yamaha sport ATVs beginning in 2012.

Youtuber Rev Motors talks about his 2009 Yamaha Raptor 350. He points out its reliability and that the only downsides are its cooling system and fuel capacity:

Depending on model year, trim, and package inclusions, the Raptor’s base model’s price could be anywhere from $4,999 to $5,599. Adding a full-on range of accessories – including GYTR aluminum engine/front A-arm/swingarm skid plates, front grab bar, antenna, hour meter, tachometer, and complete racer pack – would increase the list price of your chosen model by at least $700. Mods would increase your expenses further.

Auction listings are priced between $1,700 and $5,460 and are usually 2004 to 2007 model years. Most of the units up for bidding are either modded or in near-stock mint condition. 2008 and recent-year models are rarely seen in auction and trader sites and would typically be $2,500 to $4,000. The white-and-gray trim seems to hold its value well, regardless of the year of manufacture.

Because the Raptor is known to share the same engine with the Warrior 350, people often conclude that the two machines have the same top speed, somewhere around 63 mph (on flat surfaces). Expectedly, this figure may differ due to the effects of weather, rider weight, vehicle condition, upgrades, and several other factors. However, there are Raptor owners who claim to easily hit 70 mph/113 kph with only minor mods and 14T for the front sprocket.

Many riders would agree that there is no way a Yamaha Raptor 350, even when heavily modified and going downhill on even terrain, would reach a top end of 75 mph. And yet, Youtuber Silencear claims to hit 87 mph/140 kph on his Raptor:

The Yamaha Raptor may be a reliable machine, but it does have a few real problems. Here are the top ones to note with corresponding fixes:

This issue is both self-inflicted and due to wear and tear and should not come as a surprise if you ride your Raptor hard. It is a frustrating issue to fix since the symptoms can give the quad owner mixed signals to what is causing the dysfunction. To rectify, you will have to do the following:

Challenges with starting the engine are mostly from a dirty carburetor and valves needing adjustment. But identifying the culprit may be more uncomplicated than it usually seems. A trick/quick test that seems to work is to turn the petcock to reserve and see if the fuel flows. If it does, then that would mean a plugged screen inside the tank – this should be a more straightforward fix than ripping the carb apart to check for causes, which can be tiresome.

All Raptor models inherently have fragile frames at the front of the engine. For secondhand quad buyers, stand the vehicle up from its grab bar and make sure to eyeball the frame’s straightness. If the wheeler has been wrecked hard, the front frame will usually break first. Look at the sub-frame where the rear grab bar mounts and verify that it is not crooked or bent. Your findings will indicate how well the vehicle has been maintained and should be the basis of how you would negotiate your paying price.

Other than the issues mentioned, the Raptor is a bulletproof machine and, just like any other vehicle, would need proper care and faithful upkeep to remain in superb working condition.

Yamaha Motor Company Limited, the maker of the Yamaha Raptor 350, was initially founded in 1887 in Shizouka, Japan. The Japanese firm began as a piano and reed organ manufacturer, eventually venturing into motorcycle production after World War II. In 1955, it parted ways with its parent company to become Yamaha Motor Co., Ltd. From the ’60s to spawning the ATV industry in the ’80s, the rest is history. At present, Yamaha produces off-road vehicles, personal watercraft, speed boats, and outboard motors.

Undeniably, the Raptor is one of those no-frills wheelers that can accommodate a wide variety of riders – from the second-guessing newbie still refining his throttle coordination to the in-training aggressive rider who prefers to spend time at the brow of the vehicle’s rev range. This mid-bore, mean machine ranks high on the fun factor, has a bit more power and suspension, and can be enjoyed by most family members. It functions and looks on the outside and has speeds that can give anyone a memorable, hair-raising experience. It’s not in the same league as larger-displacement, race-ready quads, but the Yamaha Raptor 350 has got a dose of all the good stuff those big-bore behemoths have.