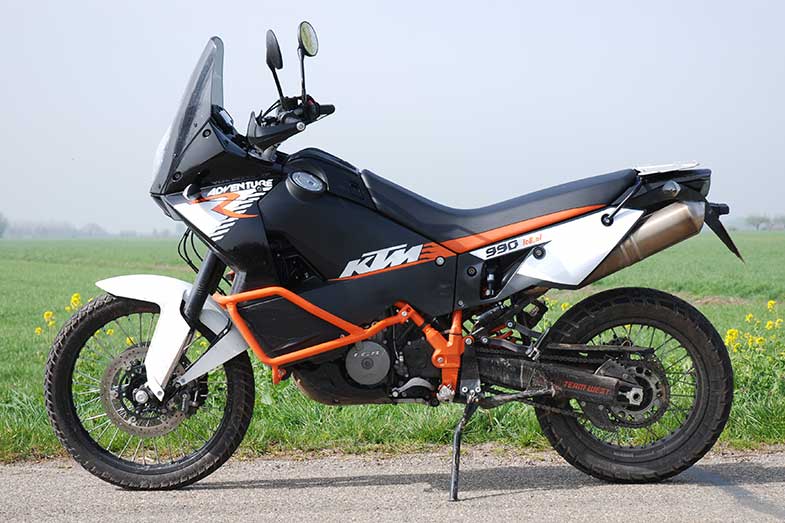 If you think that the X-Bow track monster is the only thing that keeps KTM busy, you are wrong. This Austrian manufacturer has been busy bringing its insane, industry-leading designs to life since its ’92 renaissance. And when I say design, I am talking about KTM’s highly-coveted road and dirt bikes – including the KTM 990 Adventure series.

Fondly called a travel Enduro, the 2007 KTM 990 Adventure is a dual-sport bike made for the free-spirited explorer. It sports a company-exclusive LC8 engine, superb ergonomics, and an aggressive, radical design. This bike is also the first to feature ABS in KTM’s motorcycle lineup.

No-fluff performance, precise throttle responsiveness, and well-thought-out power-to-weight ratio are among the other tempting attributes of this purpose-built two-wheeler. Great for touring and outdoor quests, it is one of the few bikes that can have the best of both worlds. Discover more about the bike that pays homage to KTM and the art of off-roading.

The KTM 990 Adventure is a dual-sport spin-off from the earlier KTM 950 Adventure – a reliable, high-performance on-and-off-road bike that allowed riders to feel the rush of a Dakar race while bringing them safely home. The 990 Adventure shared the 950’s V-twin LC8 engine. But unlike its predecessor, the Adventure’s powerplant is fuel-injected, paired with a catalytic converter that allows it to meet Euro III regulations.

Introduced to the public from 2007 to 2013, the Adventure bike was designed to be the meanest, sportiest-looking big thumper on the market. And this effort seemed to have paid off, with only the Suzuki V-Strom trying to contend with the LC8 wheeler. Handsome and aggressive, the KTM 990 sported geometric, full fairings and an almost 90° windshield that effectively reduced drag and buffeting and looked the part of a rally bike replica.

All three trims of the KTM 990 Adventure were built to cruise on the highway and get dirty off-pavement. The R model is ideal for taller riders (when I say tall, I mean above 6’4″ and with more than 33″ inseam) due to its long-travel suspension and grippier, firmer seat, while mid-height or smaller drivers can take their pick from the rest of the bikes in the series. The base and S models are not to be disregarded – you may be surprised to find yourself tiptoed while on halt at a stoplight.

The standard model, in particular, is comparable to a carbureted, jetted KTM 950 Adventure with FMF pipes but minus the taller suspension. Standard and R models differ in suspension and horsepower. Whereas the Baja Edition produced 117 hp and had white plastics, handguards, and crash bars. Ultimately, you can tell the versions apart based on their finish, suspension, power output, and accessories.

The “Most off-road-capable travel Enduro in the world” description is befitting the 2013 KTM 990 Adventure Baja Edition, which went out guns blazing during the last production year of the series. This highly-engineered two-wheeler was built as a tribute to Baja and KTM’s slew of championships and made exclusively for the North American market. It includes one-of-a-kind Baja graphics, orange powder-coated frame, frame-color crash guards, Dunlop 908 RR tires, tank, and rear waterproof luggage bags, suede-style seats, aluminum-steel sprocket, and GPS base mount.

Here is a sneak-peek into the famed and unrivaled off-roading bike:

The KTM Adventure 990 lineup used the LC8 engine across all model years. This company-exclusive engine was mated with a 43-mm Keihin carburetor for the 2007 KTM 990 Adventure S model and a Keihin EFI EMS for all other model years and versions. Fuel economy dramatically improved for the 2013 KTM 990 Adventure R and was advertised at 40 mpg (5.88 L/100 km).

All KTM Adventure 990 models have a six-speed dog clutch engagement and manual transmission.

For 2007 to 2012 KTM 990 Adventure models, stock tires remained unchanged – except for the Limited-Edition trims, which sported Dunlop 908RR off-road tires. Interestingly, the 2007 S model did not have ABS, but the rest of the models did.

The front suspension is an inverted WP 4860 MXMA fork. The rear suspension is similar to that of the KTM 450 EXC. But instead of the aluminum swingarm that allows 13.2 inches of wheel travel, it came with a hydraulic preload adjuster that provides only 10.4 inches. The KTM 990 Adventure R model has a wheel travel of 245 mm/9.65 inches for both front and rear wheels. Travel increased by another 3 mm for the 2013 Baja/Dakar Edition.

Overall dimensions of the bike are not specified, even on KTM’s website. But for shipping purposes, the measurements would be 210 x 110 x 70 cm (after taking off the front wheel, handlebar, and windshield to reduce volume). You need not worry if you do not want to dismantle parts of your bike, as cargo companies usually measure and weigh bikes for dispatch.

Chrome-Moly steel frames, aluminum sub-frames, and plastic body material are characteristic of KTM 990 Adventure bikes and the entire KTM motorcycle line. Furthermore, the company’s signature orange and black matte finish make the dirt bikes unmistakably KTM. For the Adventure series, however, the Austrian firm deviated a bit by also offering the trims in blue and white. Likewise, the emergency off switch came standard with 2007-2013 versions.

Stock 55-watt high/low beam headlights provide the two-wheeler light distribution. The high beam light is sufficient for cruising at 65 mph on the freeway, but the low beam does not do as well, especially in rough weather conditions or rain. The orange glow from the dash does not help either – it is best to have auxiliary lighting for visibility.

A large tachometer fills the majority of the space on the instrument cluster. You will also find a digital readout for temperature, speed, and dual trip meters. An automatic trip reset activates when the low fuel light comes on, letting you keep track of the distance traveled. A bright, orange backlight illuminates these indicators at dark.

Findings reveal that high heat, the small amount of fluid in the system, and a single O-ring design piston seem to combine to cause the said failure. To fix it, get a newly designed aftermarket replacement for your bike. Other professional outfitters have also developed a better design spacer meant to cure the heat problem with the OEM clutch slave. Replacing the clutch fluid regularly also prevents recurrences.

A TSB was issued providing instructions on how to properly torque the bolts, as leaving them be can potentially destroy the clutch cover for affected 2007 950/990 models. No other checks are required once the bolts have been inspected if bent or broken and re-torqued if needed. Loctite is not necessary for these fittings.

First resolved via a 2003 TSB, this issue resurfaced in some 2007 Adventure models and once again addressed through a Recall Tech Bulletin issued in 2007. When this occurs, either one or both of the screws holding the chain slide guard to the swingarm loosens and backs out. The problem may result in locking up the chain and eventually the rear wheel. Cleaning the faulty screws, reinstalling them with Loctite 243, and torqueing them to 10Nm does the trick.

Symptoms include a sudden transition from off to on throttle, stalling when throttle shuts off over 5,000 RPM, and throttle engine shut down. Remedies include: installing G2 throttle cams, replacing the battery or tightening its loose cables, aftermarket workarounds, and FI mapping updates. This issue was not permanently fixed until 2009, when all LC8-powered bikes received new ECUs.

Poor running and stalling trace back more to a fuel-type issue rather than the lack of upkeep for the bike. Ethanol-blend fuels (used in some parts of the world) are known to clog fuel filters. Changing filters regularly and using a pre-filter when you suspect the fuel quality or are hard-pressed to use a low-grade type can limit this problem’s effects.

Other known issues, such as wiring and immobilizer problems, have yet to be permanently resolved. For wiring problems, owners should inspect that the harness has sufficient slack and make sure to re-route those that seem to bind. For immobilizer malfunctions, some enthusiasts suggest using a 2008 KTM 990 Adventure ECU and ignition switch as a workaround – although the Austrian manufacturer has never seconded this.

Replacing the 950 Super Enduro as the frontrunner in the liter-class for off-road riding is a big shoe to fill. More so is balancing it with on-road drivability. That said, you may notice some shortcomings on the part of the Adventure. Fortunately, all it takes is a few tweaks here and there – and you will get the most out of your KTM riding experience:

KTM (Kraftfahrzeuge Trunkenpolz Mattighofen Aktiengesellschaft) is the world’s largest European motorcycle manufacturer and is the maker of KTM 990 Adventure. It began as a car repair shop in 1934, went through successes and bankruptcy, and re-established itself in 1992. It has produced adventure-ready bikes built for sport and leisure and has not looked back since. Pierer Mobility AG and Bajaj Auto Limited International Holdings B.V. own the Austrian firm with 13 subsidiaries, 307 world championship titles, and numerous motorcycle models under its belt.

The KTM 990 Adventure may have begun as a spin-off, but it has eventually held its own through the course of its run. Its capability to perform beyond expectations both on pavement and on dirt makes it a standout. In terms of aesthetics and high performance, it comes second to none. The KTM Adventure 990 is an off-road masterpiece that speaks true to its lineage and carries on with the KTM legacy.