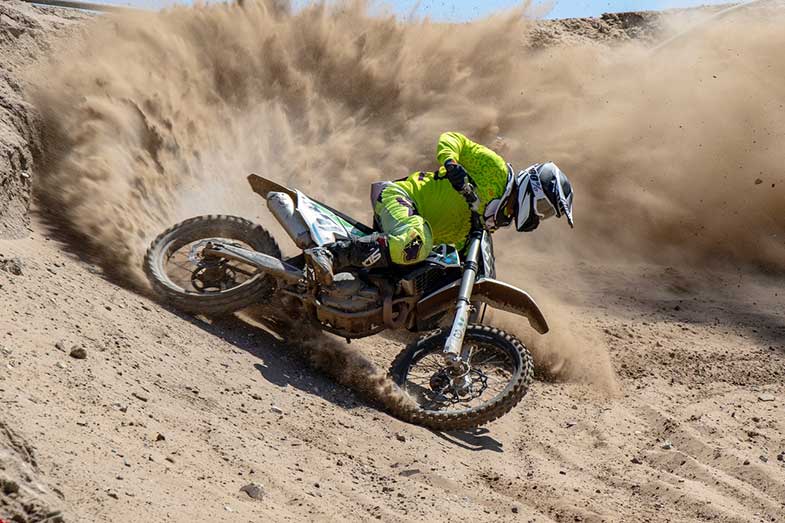 The right dirt bike will help you enjoy beautiful and challenging trails around your country while staying safe. Many established manufacturers around the world make their products available in several countries. Some people wonder, though, if American made dirt bikes exist because the most popular ones are usually made in Japan.

Do American made dirt bikes exist? Yes, there are USA-made dirt bikes, but you’ll mostly find old models since manufacturers stopped operations. Even ATK Motorcycles, the only existing dirt bike player in the USA, export parts from other countries. They also no longer produce new dirt bike models.

Although there are a lot of American made dirt bike companies, let’s focus on two of the most reliable brands and their model units: ATK Motorcycles and Alta Motors. We’ll also have a quick overview of an American brand specializing in motocross bikes for the youth. Lastly, we’ll discuss a dirt bike brand often confused as made in the USA and other popular brands in the industry.

With higher expenditure in labor, materials, and overall operation, dirt bikes made in the USA found it difficult to compete with most imported products. Still, two brands made their name in the industry. You can still find some of their most popular models being used and sold, especially second-hand units.

Of course, improvements were made not just in the engine but also the unit’s body and frame. This series is available in two-stoke 250 and 406 engines and four-stroke 350 and 604 engines. You’ll also find two different models, Motocross (Mx) and Cross Country (CC). In other year models, each model was available in two different starter features, namely kickstart and electric.

Throughout the years, other upgrades included eco-friendly features, better tires, double exhausts, and self-cooling engines. The Rotax series’ last models were released in 2001, and they are the 250/260 Enduro, 605 Enduro, and the 600 Dirt Tracker.

The other ATK series was the Cannondale that included the upgraded versions of the 2001 Rotax models. Other models introduced were:

Being one of the most popular American made dirt bike brands, Alta Motors wasn’t as established as ATK Motorcycles and didn’t last long in the industry. It opened its doors in 2007, but in 2019, the Canadian group BRP (Bombardier Recreational Products) bought the companies assets. Still, Alta Motors maintains a legacy in the modern electric motorcycle industry.

This Brisbane, California-based company had several electric bike line-ups, including Supermoto (SM), an Enduro (EX), and a Motocross (MX). The latter being the most popular series, below are two models that made a name.

In comparison with other MX2 and Lites classes, Alta Motors’ Redshift MX had no air filter, oil system, and internal combustion engine. Rather, the unit has a 350-volt lithium battery that pumps up to 5.8kWh of speed, a lightweight orientation of 261 pounds, and a clutch-free transmission.

Additionally, the Alta Motors Redshift MX has a PMAC motor with a maximum power of 42HP and a max torque of 120 feet-pounds. It’s also equipped with a lightweight chassis, a dirt-track suspension, and reliable Brembo brakes.

As the last model of an electric motorcycle released by the company, the Redshift MXR is an upgraded version of the Redshift MX. Its motor produces a maximum power of 50hp, a torque of 147 feet-pounds, and a speed level of 14,000 RPM.

It’s also worth noting that the MXR’s motor has a water-cooled case, so you can ride it even when the temperature is high. It also has a waterproof and dust-proof design, so it requires little to no maintenance.

Another great upgrade is its battery, which has two off-board charging systems, namely 3.3kW and 2.7kW. When you use a 240-volt charger, it will take 1.5 hours to get a 100% battery power, while three hours if you use a standard 120-volt charger.

The unit’s engine control unit (ECU) has four maps: Sport, Eco, Overclocked, and Performance. Depending on which map you tune the unit in, the battery can last up to approximately four hours when you use it in the woods, while 25 minutes when motocrossing.

Located in Hillsdale, Michigan, Cobra Moto has been specializing in manufacturing mini motocross bikes since 1993. They have their own R&D, engineering, business operations, assembly, welding, and machining departments.

You should note, though, that you can’t consider their products as American made dirtbikes since they’re only designed for motocross and not for “real” off-road, dangerous terrains. The company’s bikes for the youth are said to have received hundreds of national titles as of writing.

They’re also lightweight enough to be handled by young riders, but not too lightweight, which might cause an accident while riding. Similarly, each of the models is durable enough to withstand the test of time. That is, of course, with proper and regular maintenance.

Is KTM American Made?

Now that we’ve discussed famous and reliable American made dirt bike brands, let’s talk about a dirt bike brand often thought of as USA-based because of its two dealerships in the country.

Officially named KTM AG, they are a manufacturer based in Austria founded in 1992 and formerly called KTM Sportmotorcycle AG. They’re well-known for their off-road supermoto, motocross, and enduro off-road bikes. They also specialize in manufacturing sports cars and street motorcycles.

If you don’t want to opt for American made dirtbikes for adults, especially since they’re mostly old models, KTM has a lot to offer.

For their four-stroke MX models, you can find four 2021 editions and one 2020 unit that all have great features for off-road terrains and motocross racetracks. Lastly, KTM also has an electric MX perfect for inexperienced and experienced junior riders.

Similar to the MX line-up, the Enduro series is available in two-stroke and four-stroke models. Additionally, there are three limited edition two-stroke Enduros. The 2021 300 EXC TPI Erzbergrodeo that comes with a unique graphic kit and KTM PowerParts, and the TPI Six Days units that have top-of-the-line KTM features.

On the other hand, the four-stroke Enduro units have features that work for riders of all skill levels. They are reliable both off-road and on motocross racetracks. They have great torque, low weight, and engine efficiency.

The Supermoto only has one model: the 2020 KTM 690 SMC R. Like any other KTM bikes, this is easy to handle and ergonomically designed. It has a powerful, low-revolution 690 LC4 engine that consumes fuel economically; in fact, it only requires 10,000 km service intervals.

With a limited number of USA-made dirt bikes, you might encounter problems searching for a model you can use on your training, adventures, or competitions. We understand that the US has some of the best standards and strict regulations for manufactured products. However, like KTM, there are other reliable dirt bike manufacturers that you can consider.

Yamaha Motor Company is among the most popular and oldest manufacturers of road and off-road bikes, as well as motorcycles and scooters. They have a selection of two-stroke and four-stroke units for racers, adventurers, and hobbyists. Like American made dirt bike companies, though, the great quality of their products comes with a high price tag.

Honda Motor Company is another established Japan-based manufacturer that has several factories and dealerships worldwide. They have off-road bikes for trail riding, competitions, and adventures, as well as dual-sport models. With their great variety of units for all skill levels and riders, their products are also quite pricey. The good thing is that with their popularity, you can easily find compatible accessories such as a quality clutch cover.

If a combination of affordability and reliability is what you’re looking for, the Kawasaki brand is worth considering. They have motocross and cross country units for adults, whether in regular or full sizes. They also offer several motocross models for younger riders.

The Existence of American Made Dirt Bikes

Nowadays, there is a limited number of dirt bike models made in the USA. That is because most manufacturing plants you can find in the country only assemble units made of foreign-made parts or manufactures one part, such as an engine, for a specific brand.

You can still opt for older USA-made units, especially since you can purchase parts and have them serviced. Nonetheless, many manufacturers specialize in producing adult and youth dirt bikes loaded with safety, ergonomic, powerful, and award-winning features. Just keep in mind that whether you’re purchasing one for you or your child, for training, adventures, or competitions, you must always invest in high-quality protective gear such as a chest protector and a helmet (view on Amazon).

Have a safe and fun motocross racetrack and off-road ride!