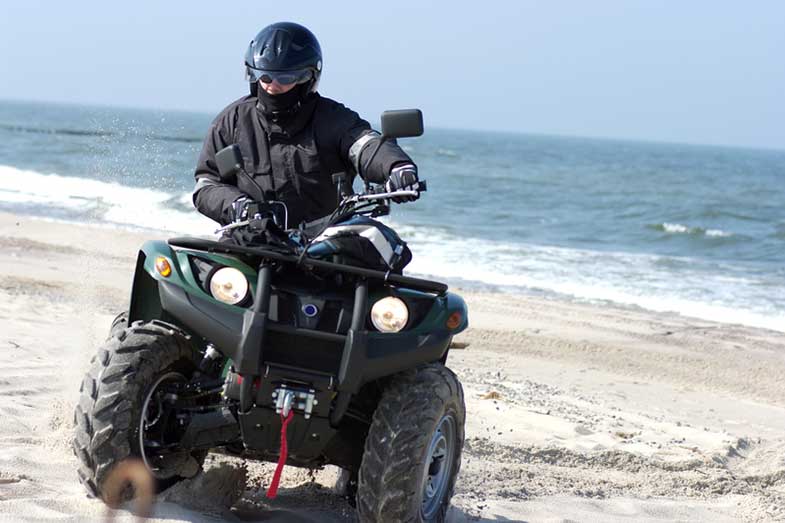 The Yamaha Grizzly 700 is the realization of Yamaha’s hard work in developing technological advancements, such as its V-belt transmission and fuel injection. A successor to the Grizzly 660, this slightly bigger machine improved aesthetically and addressed some of its precursor’s known flaws. And it did all this while keeping true to the strengths of its lineage.

Introduced in 2007, the Yamaha Grizzly 700 is regarded as the Japanese firm’s most powerful ATV. Its stronghold in the market is attributed to its practical yet excellent features. Its Ultramatic transmission, 686cc engine, and modest but rebellious look put it in a class of its own.

Despite being far from perfect, the 2007 Yamaha Grizzly 700 succeeded in maintaining the Grizzly’s position in the ATV scene. The machine is continued proof that Yamaha’s execution is still right on the mark. And if that were not enough, the company made further changes to the Grizzly beginning 2016, making it even more fool-proof. Learn about these enhancements, along with the four-wheeler’s specs, top issues, and highlights, in this article.

The emergence of technologically advanced four-wheelers called for an upgrade of the Grizzly 660 into a machine that could compete head-to-head with top name brands in quality, popularity, and sales. Hence, the 2007 Yamaha Grizzly 700 was born – a mean workhorse that included a 32-bit ECU for electronic power steering, a 44-mm throttle-body fuel injection, and a larger 686 cm3 displacement. These additions may seem inconsequential to the untrained eye. But for enthusiasts, these changes in the vehicle’s cylinder, frame, and suspension meant a huge improvement in durability, power output, and overall performance.

As for Yamaha Grizzly 700 prices, the range was from $8,199 to $10,099 – depending on make and model year, body-color, and package inclusions. Special-Edition and Limited-Edition trims were the most expensive of the lot. Average retail for these machines is valued at $4,000 at least. What is good about the Grizzly 700 series is that its base models were offered in camouflage finish at no additional cost, unlike other Yamaha ATVs where you have to pay a premium to get a Hunter-themed quad. Actual Hunter Edition models are available, of course. But these slightly pricier vehicles came with gun racks and a cargo box that can be placed at the front or rear.

This video by Mid Nebraska Motorsports is a must-watch for prospective Yamaha Grizzly 700 buyers. The presenter gives a walk-through, goes over known issues, and provides helpful tips – a bit of everything about the vehicle:

Let’s look at the pros and cons of owning this classic four-wheeler:

Youtuber Maritimer shares some of the highlights and lowlights of the Grizzly in this video:

In addition to the above lists, here are other common issues you would be better off knowing about the Grizzly 700, which seem to have inherited downsides from its 660-class sibling, except for the third one:

The top speed of a stock Yamaha Grizzly 700 is 64 mph. Some owners claim to hit 70 mph with their 2015 Yamaha Grizzly 700. Upgrades do not guarantee that results will be the same for everyone. Riding style, weather conditions, and terrain are just some of the factors that make the Grizzly’s top speed vary. However, it would not hurt to modify your brute to get a better top-end reading. Here are some upgrade recommendations from online resources and Grizzly owners that can help enhance your 4×4’s rapidity and power:

Like the EPI Mudder Clutch Kit (view on Amazon) or JBS Extreme clutch kit, other mods will reduce top speed but provide better rip at the bottom end, in reverse, and low gear, especially when you get stuck in the mud. Gains are very noticeable during back shifting and in doing wheelies. However, these capabilities may not be on everyone’s checklist. Ultimately, the need for speed or low-end grunt is all a matter of personal preference.

Mods will also largely depend on your intended use of the quad. If you are hauling wood and other similar things, a Kodiak 450 (for instance) may already be sufficient. Its turning radius, transmission, towing rate, EPS, and on-the-fly 4WD are comparable to a 700-class machine. But if you need a powerful trail bike with a true differential lock, then the extra 280-cc of the Grizzly 700 makes a huge difference.

The world’s best in water vehicle sales and among the Japanese companies that molded the ATV industry, Yamaha Motor Company Limited was once widely known for its piano and reed organ production. The maker of the Yamaha Grizzly 700 did not get into the automotive and motorcycle industry until after World War II. Parting ways with its parent company in 1955, the firm eventually became Yamaha Motor Co., Ltd. At present, Yamaha’s product offerings range from motorsports and off-road vehicles to personal watercraft, speed boats, and outboard motors.

Modded or stock, the Grizzly’s monstrous power has never failed to satisfy people’s adventurous desires. Its variety of trims and specifications cater to riders of all ages and skill levels. Its simplistic but aggressive styling keeps it relevant and well-loved. It is a high-performing machine that is as capable as it is versatile, continuously evolving to answer to the demands of the riding community and general consumers. May you be a beginner, a seasoned biker, or a veteran on the dirt road, the Yamaha Grizzly 700 can always help bring you back to places and moments where you can lose yourself.