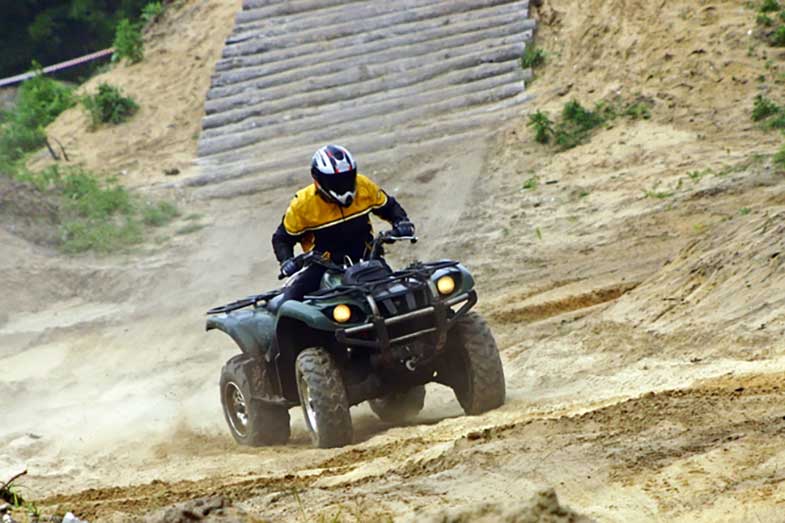 Yamaha’s road to big-bore machines began with the creation of the Yamaha Grizzly 600. This large-displacement UTV is a pillar of the ATV landscape and enormously responsible for spawning the 1,000-cc behemoths that are the rave of the off-roading community. This four-wheeler was the centerpiece of the North American outdoor life back in the late ’90s – one of the vehicles that helped restore the ATV industry from near-extinction.

Produced from 1998 to 2001, the Yamaha Grizzly 600 had the largest engine displacement during its time. Boasting a 595-cm3 Paris-Dakar-inspired engine, Ultramatic V-belt transmission, functionality, and pastel bodywork, this 4×4 was a big hit with consumers and off-roaders alike.

Because of its standout features – including individually-controlled front and rear brakes, a one-way sprag clutch, selectable 2WD and 4WD (with a push of a button), oil-cooling system, and towing capacity – it was regarded as the King of 4x4s. Not only did the quad become the talk of the town fast, but it also became a huge contributor to the growth of mud events across the country. Want to know more interesting stuff about the Grizzly 600? Read on.

The Yamaha Grizzly 600 4×4, produced from 1998 to 2001, has a 595-cc four-stroke SOHC engine from the big-selling Enduro-style ’86 XT600 Ténéré – a culmination of Yamaha’s efforts to enhance the off-road performance of XT models further and make it more suitable for full-fledged rally competition. The air- and oil-cooled power mill gets its carburetion from a 40-mm constant velocity Mikuni BST. The transmission features a V-belt driven dual-range Ultramatic with reverse, cranked by a primary electric and auxiliary recoil starter with auto decompression. The suspension system uses front MacPherson struts and a mono-cross swingarm for the rear.

It has a total of four trims and at least 11 models throughout its four-year production run, namely:

Often confused with the Big Bear (before IRS, that is), the Grizzly 600 is a monster on low-end, making it a charm for hauling needs. It rides as well on factory 25-inch tires as on 27-inch 589s, some wheel spacers, and a decent clutch kit. Thanks to its race-ready engine, the wheeler never disappoints – especially when it comes to meeting the whims of off-roaders, young and old. Many riders enjoy this 4×4 in stock form. But aficionados stretch the vehicle’s capabilities further with the aid of a snorkeled belt and motor intake, relocation of the oil cooler, jetting, and lift kits, to name a few.

Cost of a Yamaha Grizzly 600

The current retail price of the quad ranges from $825 to $4,210, depending on the model year, overall vehicle condition, and add-ons. References for the list price of the ’98 model are a bit obscure except for the value of the Hunter Edition. It was the priciest of all the trims released in the market in 2001 for $7,099. For an additional $3,100, consumers can get radio-cassette speakers, high-performance exhaust, power blades, and a snowblower included in the package when buying a brand-new Yamaha Grizzly 600.

Youtuber Braydon Price talks about a Grizzly 600 he bought off Craigslist. Since it was sitting in the previous owner’s property for over a year, Braydon had to do some mods and replace some parts to get the brute to run. He did give details of the upgrades he did on the quad in this video:

Here are the most common challenges owners have encountered with their Grizzly four-wheelers that are worth taking note of:

Other anecdotal concerns with the Yamaha Grizzly 600 include the quad being very sensitive to water. Because nothing is between the cylinder and the exterior, the piston reaches around 1000° when in deep water. And once the water cools the cylinder, it shrinks immediately – resulting in engine seizure. Another thing is that the pistons are a bit short on the 600s. During extreme cylinder and piston wear, the piston would kick sideways in the bore and destroy itself. Long before reaching this point, however, the vehicle would have had a loss of compression and quit running.

The top-end speed of a stock Yamaha Grizzly 700 is 60 mph. Some owners claim to have 62-65 mph stock but advise riders to take a few steps to hit this figure:

The above list covers fundamental things you need to do on your four-wheeler, on top of high-performance mods and other servicing needs. Keep in mind that some of these upgrades, while gaining you a few more miles per hour, will take away from your low-end. Veterans also advise owners to take caution when fitting larger knobbies on their 4×4, as they have proven that tires larger than 27 inches can be detrimental to its overall performance. Greasing overkill also does more harm than good on your bike.

Here is a video by Outdoor Gorilla covering the obvious and not-so-obvious aspects of a quad that needs checking when buying one secondhand. The presenter demonstrates things to check through a Kodiak, which somewhat shares similar mechanical components with the Grizzly 600:

Other must-check items that were not mentioned or fully explained in the video are as follows:

Yamaha Motor Company Limited is among the shapers of the ATV industry and is the maker of the Yamaha Grizzly 600 4×4. This industry-leading company is the world’s best in water vehicle sales and was initially widely known for its piano and reed organ production. Despite being highly respected in the automotive and motorcycle industries, the Japanese conglomerate did not get into these segments until 1945 (after World War II). Parting ways with its parent company in 1955 allowed the firm to focus on developing top-of-the-line product offerings, which include motorsports, off-road vehicles, personal watercraft, speed boats, and outboard motors.

As the first of its breed, the Grizzly 600 not only paved the way for Yamaha’s big-bore journey but also raised the bar for the competition to follow suit. But while it was recognized as a mighty 4×4 right out of the gate, it had minor hiccups and a flawed suspension that pushed Yamaha to go back to the drawing board.

Its reign as King of 4x4s may have been short-lived, but not in vain. The versions that succeeded it turned out to be revolutionary vehicles that could carry on their predecessor’s legacy. Today, the quad’s lineage continues to offer aid and enjoyment to countless folks and thrill-seekers – thanks to the example set by the Yamaha Grizzly 600 4×4.