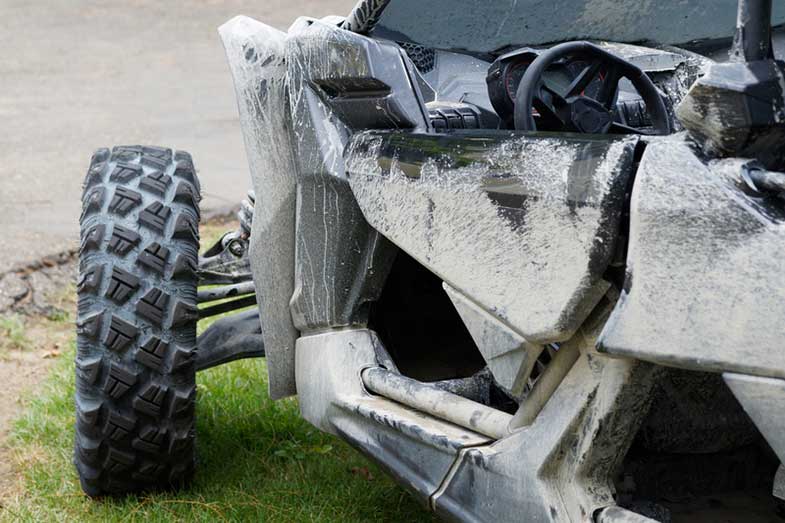 When the Wolverine series ceased production in 2010, enthusiasts were left hanging – with so much still left to improve on the Wolverine lineup. Consumers had hoped for a four-wheeler with independent rear suspension, power steering, and an EFI engine. They wished for a bulletproof Wolverine that did not have as many problems as its predecessors. By 2016, the long wait was finally over.

The Yamaha Wolverine 700 was Yamaha’s entry into the recreational UTV scene. With its EFI engine, a spacious cabin, and a top-notch suspension, this quad was perfect for trail riding and slow-crawling sections.

This guide covers the Wolverine 700’s specs and features, known flaws, and return to the limelight. We’ll also go over its top speed and how you can improve it.

2016 saw the unveiling of the all-new Yamaha Wolverine 700, which was momentarily discontinued after a successful 15-year run to make way for other models under Yamaha’s ATV lineup. Like its 350- and 450-class predecessors, Yamaha had consumers in mind when they developed this four-wheeler. The company wanted to tap on the segment of riders who couldn’t decide between a sport trailer or utility machine.

The Yamaha Wolverine 700 was a sport UTV – a two-seater off-road vehicle with specifications reminiscent of the Viking SxS and the Wolverine 450. It featured an EFI-fed liquid-cooled engine mated to an Ultramatic CVT transmission, flashy but functional body styling, an excellent brake mechanism, and an advanced suspension system. Smart features built into the quad included frame rails that protect rear wheels and suspension, a full steel skid plate, a mid-size composite bed with a slid-on tailgate, and a lower hood line for improved trail visibility.

Consumers are delighted with the Wolverine’s agility and ability to boost rider confidence as it scurries through trees and climbs rocky ascents with ease. Its torquey 708-cc power mill conquers trails of all shapes and sizes, rain or shine. Its plush suspension is downright brilliant and unlike any other – with excellent wheel traction and KYB shocks that can tailor to anyone’s preferred riding experience. On top of all that, its superior braking system works without the twitch experienced in other competition vehicles.

While its functionality is top-notch, not everyone is sold on the Wolverine entirely. Due to its wide stance, riders who frequent wooded trails are bound to scrape rocks and fallen branches now and then. The EPS provides too much assist at slow speeds, which feels a bit unnatural for more skilled operators, as with rotating the wheels to get the desired wheel travel. Likewise, the Wolverine 700’s underside can be tough to clean without removing the entire steel skid plate that provides it full protection.

Wolverine 700 models are available in Hunter Green or Steel Blue. For an additional $600 on top of the MSRP, you can opt for the Realtree Xtra paint scheme – perfect for hunting. All units come with a six-month limited factory warranty.

The Yamaha Wolverine 700 top speed is 53 mph on stock. With mods, it can keep up with a 900-cc Polaris RZR. 2020 models have a 2-mph gain. Your stock 2016 trim will go up to 55 mph if you go past the limiter and put on a machined sheave. However, Wolverine enthusiasts advise against this as it goes against what the vehicle was initially designed to be best at – mid-range pull. Other things that affect top speed are tire size and pressure, windshield, rear windscreen, and mirrors – so think twice before going all out with those upgrades.

Understandably, riders who demand more speed from the Wolverine do not primarily use the vehicle for trail riding but rather daily driving. Riding an SxS on the road is popular, and making a 4×4 street-legal is also easier.

How to Increase the Speed on a Yamaha Wolverine 700

If you want to get more speed from your Wolverine, here are some tips:

Here are the top four struggles owners have with their Wolverine 700s – proof that the lineup is still a work in progress, despite its enhancements:

This is the number one complaint Wolvi owners have about the 708-cc engine. It is quite tricky to catch this issue early on and leaves owners baffled as the oil reads full mark even at 900 miles but would drop to low just 40 miles after being refilled. In worse cases, even the local dealer cannot pinpoint the cause of the problem. There is also no sign of oil leakage or burning oil down the trail.

Yamaha vehicles, including Wolverine models, have this as a common problem. The reason behind this (specific to the Wolverine) is that Yamaha made the fuel run lean in the lower throttle opening range. A quick fix that owners usually do is to wrap the exhaust header. On the other hand, racing outfits and experienced mechanics advise adding a simple fuel controller and a bit of fuel to reduce glowing and exhaust temperature.

A glowing hot header pipe may be the primary cause of this problem, with the cracking noise only happening once the header pipe has already gone brittle. To fix, block the air induction system (AIS) and add a power commander. An ECU reflash is another option instead of fitting a positive crankcase ventilation or PCV valve into your quad. Doing this will not entirely resolve the flaw but will reduce its occurrence dramatically. Yamaha did release a TSB indicating a fix for this by changing the joint’s springs from two to four. Getting a ceramic coating on your pipe in and out will also help reduce heat radiation and extend its life.

Yammies state that intermittent EPS lights and functions characterize the issue. They also observe this to happen during cold weather conditions, where power steering becomes quite stiff, and lights do not work at all. Should you experience the same, make sure to check for any loose contact to the keyed positive lead (orange wire) in your quad’s system, or if it happens only in specific conditions, say, at idle. Often, this is due to a loose wire, low voltage, or corrosion.

Most of these reported challenges came about in the 2016 to 2017 models. Beyond those production years, the Yamaha Wolverine remains to be a reliable, no-frills wheeler. Those encountering problems with their Wolverines can always count on Yamaha communities and forums to support proper diagnosis and resolution. However, if you do not have the technical and mechanical savvy to take on the issue, then consult your local mechanic or go to your nearest dealer.

Yamaha Motor Company Limited is a Japanese corporation that produces a plethora of life-enriching products and services – including motorcycles, off-road vehicles, personal watercraft, speed boats, and outboard motors. Its mission of creating Kando, a deep, satisfying feeling when you encounter something of great value, is reflected in the thoughtfulness and expertise that goes into its product line. To date, Yamaha continues to innovate, excite, inspire confidence, and strengthen ties as it expands its offerings worldwide.

The continuously-evolving Wolverine has the perfect balance of high-performance suspension, handling, drive train, and chassis – all backed up by Yamaha’s statement of reliability. The four-wheeler is awesome at rock crawling in stock form, and its low-end grunt gets all the power to the ground. Modified, it can turn into a beast that can give any 900-cc sport-utility vehicle a run for their money. It may not be the fastest vehicle around, nor is it a pure sport or utility machine. But despite its imperfections, it exhibits some of the best attributes of both.

All in all, the Yamaha Wolverine 700 is what its avid followers have anticipated. It is a highly capable recreational side-by-side that will take the brave upon any form of terrain they are bold enough to conquer and will loyally feed their off-road whims for years to come.