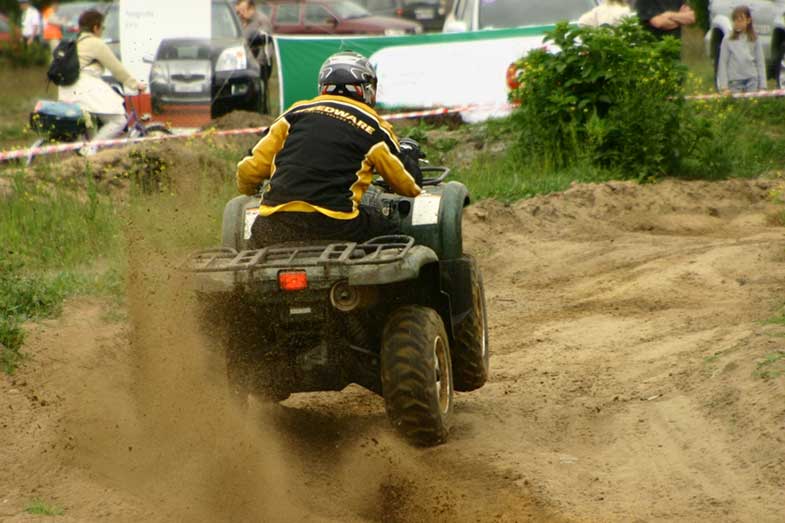 The recent millennia saw the rise of V-belt transmission, four-stroke, fuel injection, and the Yamaha Grizzly 660. Following closely behind the Raptor, this almost-big-bore machine addressed its precursor’s shortcomings when it entered the ATV scene in 2002. It had a sporty look, a powerful engine, and a utilitarian build that promised tons of fun on the ranch as it did on the trails.

The Yamaha Grizzly 660 was a spin-off of the Raptor 660, produced from 2001 to 2006. Fondly called the Bear or Grizzly, this four-wheeler boasted a sportier look, an Ultramatic transmission, and an improved suspension. These standout features made the quad a top choice for trail riding and chores.

Execution is everything, and Yamaha did right in this aspect with the Yamaha Grizzly 660. Along with its toughest competitors such as the Ranger, Sportsman, and Rincon, the machine unfalteringly delivered the ultimate riding adventure to both trail and aggressive riders. It may be considered dated or puny by today’s standards, but when it came out, it was an unrivaled 4×4. Continue reading, and relive the glory days of the Grizzly.

The Yamaha Raptor 660, considered The Ultimate Sport Quad, earned such a stellar reputation that Yamaha deemed it best to create another model that derived its engine from this iconic vehicle. Hence, the 2002 Yamaha Grizzly 660 was born. Unlike its predecessor, the Grizzly did not have dual carburetors. But it did utilize a robust 44-mm Keihin carburetor and five-valve cylinder head, independent double-wishbone suspension, and hydraulic disc brakes – instantly making it one of the go-to four-wheelers in its category.

Produced from 2001 to 2006 (for 2002 to 2007 models), this rec-utility vehicle stayed in the market for six consecutive years. It launched with a newly construed chassis, designed to address the biggest shortcoming of its stablemate, the Raptor. Double-A-arm, independent suspension on all fours with sway bars replaced the former front MacPherson better struts and rear swingarm suspension. It also had a push-button front differential lock and improved instrumentation.

The Grizzly had several different trims through the course of its production, namely:

Yamaha fed the Grizzly 660 so well that it remained among the quads with top popularity and sales, despite the emergence of multi-cylinder beasts from the competition. It was not until the advancing tide of technology in 2007 that Yamaha had to update the Grizzly to include a 32-bit ECU for power steering, a 44-mm throttle body for fuel injection, and a larger displacement of 700 cm3. Additionally, cost-effectiveness and the aim for weight savings resulted in the Grizzly shifting to a four-valve cylinder head and a redesigned frame and suspension and losing its auxiliary mechanical pull-starter.

Kelley Blue Book values are between $2,275 and $4,000, with 2006 models holding the highest value due to the number of trims released that year. Trade-in values are from $1,990 to $2,700 for units in good condition and with typical mileage. Mods and additional accessories may add to the vehicle’s worth. On the other hand, secondhand Grizzlies range from $1,700 to $2,100 but tend to be scarce on trader and auction sites. Some units open for bidding come with free shipping. Be wary of quads selling for less than $1,500, as they may come with non-working shafts, a weak battery, or deteriorated plastics.

In this video, ATVTV rates a 2005 Yamaha Grizzly 660 after a quick test of the vehicle:

The top speed of a stock Yamaha Grizzly 660 is 70 mph. This figure may change, depending on altitude, temperature, humidity, rider weight, terrain, modifications, and overall vehicle condition.

It’s important to examine the pros and cons of a four-wheeler before making a purchase decision. Here are a few things to consider:

In addition to the above setbacks, here are a few more known issues with the Grizzly worth noting:

Most of these drawbacks are self-inflicted, if not circumstantial. Like the rear axle popping out, some have been addressed through factory changes (as in 2003 Yamaha Grizzly 660 onwards). Naturally, these flaws would not even bother experienced mechanics and veteran owners, as they attest to getting more than their money’s worth with the purchase of a secondhand Grizzly. But for enthusiasts who want more, they have to bear in mind that upkeep and a few appropriate mods are needed to draw the most out of this behemoth.

How to Make the Yamaha Grizzly 660 Faster

Often, the reason behind the endless attempts at customizing the Grizzly is the rider’s need for speed. Over the years, professional mechanics and savants have equipped these machines with all kinds of Yamaha Grizzly 660 parts to increase the four-wheeler’s top end. Below are some of the suggested upgrades that can improve your quad’s speed:

Yamaha Motor Company Limited, the world’s best in water vehicle sales, is the maker of the Yamaha Grizzly 660. This Japanese firm started as a piano and reed organ manufacturer in 1887. It was not until after World War II that the company ventured into the production of motorcycles. Eventually, it separated from its parent company in 1955 to become Yamaha Motor Co., Ltd and built the ATV industry two and a half decades later. Today, the product offerings of this industry leader span from motorsports, off-road vehicles, personal watercraft, and speed boats to outboard motors.

The Yamaha Grizzly 660 can conveniently get lost in the superlatives of its competitors such as the Prairie, Rincon, and Vinson. Despite this, it is still a capable machine that has remained at the forefront of the ATV scene. Maneuvering the vehicle boosts confidence and almost feels like riding an extension of yourself.

The faint-hearted may find the Grizzly’s proclivity for unloading its suspension mid-corner a tad nerve-wracking, especially when negotiating a switchback. But its responsive engine, braking system, and CVT transmission never fail. It has given many riders joyous moments and challenging situations, and it will continue to do so for the years to come.