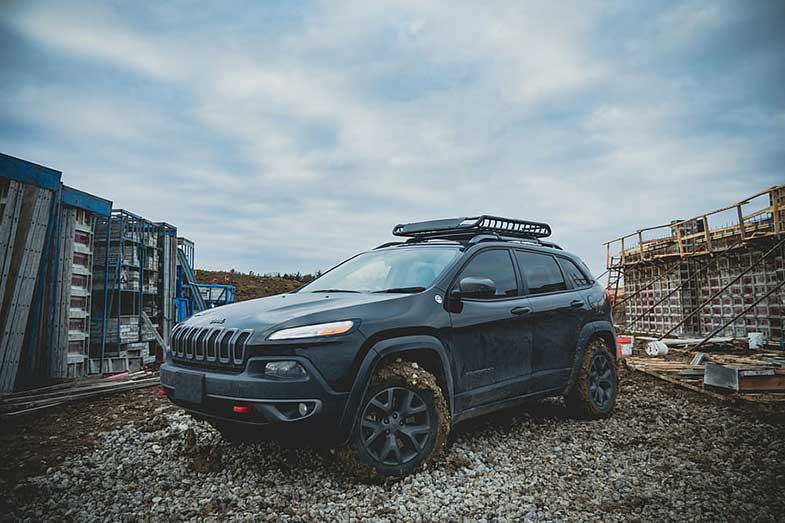 If you plan on purchasing a new vehicle, it can be confusing if two groups seem to be similar but have different terminology. Since you’re particularly curious about SUVs and Jeeps, let’s explain the difference.

Is a Jeep an SUV? A Sport Utility Vehicle (SUV) is a general type of car, while a Jeep is a generic term for vehicles similar to the standard models of the brand Jeep. Most Jeeps are SUVs, so it’s difficult to compare the two.

SUVs generally look great in urban settings because of their sleek appearance, while Jeeps typically have a rugged style that’s ideal for off-road use. However, we may spot some subtle differences if we understand everything there is to know about SUVs and Jeeps. Let’s start with the SUV.

What makes an SUV an “SUV”?

You can easily identify SUVs by their shape. They have a bulky, sporty appearance because of their large wheels and higher clearance for better visibility. They also look rugged just like Jeeps, but their modern style makes them popular in cities.

If you want a vehicle for daily commutes and – at the same time – fun weekends out of town, SUVs are for you. They can be used on most surfaces like sand, grass, rocks, mud, ice, and snow. And, the exciting part, they can accommodate many people and cargo without looking like a small industrial truck or a public transport vehicle.

Those benefits make more sense once you learn that SUVs are designed for multipurpose use. They’re the improved version of standard cars when it comes to durability and capacity.

Despite the general idea that SUVs are bigger than cars, they can still categorize into groups in terms of size.

Medium-sized SUVs are perfect if you want something larger than a Crossover. They’re recommended for small families. They’re also practical for cities since they’re not so big and wasteful of fuel. In fact, they have fewer emissions.

On the other hand, for large families, it goes without saying that bigger SUVs are best for them. They usually have seven seats and a large section at the back for lots of luggage. They’re also the ones recommended for off-road adventures and towing snowmobiles, boats, and other machines with a tow strap (View on Amazon).

Why are Jeeps called “Jeeps”?

Through the years, the brand Jeep has become a generic term for boxy, rugged off-road vehicles. That’s one of the primary reasons why many people are curious about the differences between SUVs and Jeeps. They’re probably thinking of the typical 4×4 for the latter. Let’s find out how Jeep became a household name.

Interestingly, it was claimed that Jeep invented the standard design of SUVs sometime in the 1960s. The original Jeep model was introduced decades before, though.

In only a couple of days in the 1940s, Karl Probst managed to design a Jeep for the United States armed forces as preparation for World War II. He successfully created a small 4WD vehicle with only three seats to keep it lightweight.

However, the company Bantam couldn’t manufacture the model. Eventually, Ford and Willys took the reins. Both companies even made some modifications. Ford designed the iconic shape of the Jeep’s front section while Willys Quad focused on four-wheel control.

As for the simple yet catchy name “Jeep,” the first theory was that it’s inspired by the acronym GP, meaning General Purpose. But, not everybody was convinced. The real name of the modified model by Ford was GPW (Government, “P” for distance, and Willys).

The more exciting theory had something to do with a particular cartoon character. Eugene the Jeep from “Popeye” was introduced before the launch of the original model.

Fast forward to the inspiration of the SUVs we use in this generation, Willys made it all possible because of its timeless Station Wagon. Jeep was already available to the masses when it was introduced.

The one considered to be the first sport-utility vehicle, however, was the Wagoneer. It was the replacement of the Station Wagon. Wagoneer included power steering and automatic transmission, two features commonly found in modern cars.

Because of the massive popularity of Jeeps, other companies manufactured models similar to the Ford-Willys version. No wonder people are confused. They see models like the Land Rover and automatically call them Jeeps.

Are All Jeeps 4-Wheel Drive?

Maybe instead of SUVs vs. Jeeps, we might be able to focus on SUVs vs. 4×4 for a comparison that makes more sense. However, is it possible for a Jeep to have a different drivetrain?

Definitely! Some Jeeps use RWD or 2WD. Many people prefer that drivetrain for better fuel economy and cheaper vehicles from dealerships.

Besides, it’s fine to operate a two-wheel-drive jeep as long as you’re not exposing it to off-road conditions. It’s best used as a big SUV in the city.

If you can’t accurately grasp the differences between 2WD and 4WD, we’re going to explain the design of both drivetrains. 2WD vehicles are powered by two wheels, while 4WD has all four. Also, 4WD vehicles are usually bigger, which makes them much more powerful than 2WD models.

Now that we’ve realized that not all Jeeps are 4WD let’s compare SUVs to four-wheel-drive vehicles in general. A lot of people even believe that they’re the same thing.

Despite the existence of 2WD SUVs, sport utility vehicles are still considered 4WD. A good SUV uses a four-wheel drive. It makes sense that SUVs and 4×4 are synonymous.

Since 4WDs are SUVs, most Jeeps are technically sport utility vehicles. This is another reason why Jeeps and SUVs shouldn’t be compared.

What Is the Difference Between SUV and Crossover?

This comparison is quite popular, as well. However, unlike the idea of comparing SUVs to Jeeps, understanding the difference between SUVs and crossovers is more helpful. They’re so different yet so similar.

We’ve already discussed the characteristics of SUVs as well as their advantages. Do they have a downside?

Compared to a crossover, an SUV is heavier and less agile. Parallel parking becomes more challenging with it. 4WD SUVs are also more expensive. You can’t just ignore the benefits of 4×4 to save money because, without it, the grip of an SUV becomes weaker on slippery roads.

Let’s proceed to the features of crossovers. These vehicles have a unibody for a classier style. They’re also easy to control and smooth on the road. More importantly, they have a secure grip on wet roads thanks to the included front-wheel drive or all-wheel drive. AWD is similar to 4WD, but the latter is more suited for challenging terrains. That’s why 4×4 is more prevalent in SUVs.

Regarding the advantages of crossovers, they’re still more spacious than ordinary cars despite being smaller than SUVs. As a plus, they have available size options, so you may go for something smaller or bigger if you want. The compact ones are for small families, while the medium-sized models typically have several seats separated into three rows.

Even better, some crossovers have more advanced AWD systems. They can handle deep snow and other risky terrains. They can maintain that ability while ensuring fuel efficiency and acceleration because of their four-cylinder or V6 engine.

Additionally, crossovers allow a wide range of extra features without breaking the bank. You can install an entertainment system for the backseat (View on Amazon), which is perfect for young passengers. You may even set up Wi-Fi to keep everyone in the vehicle updated. And the best part? There are safety systems you can add to a crossover to reduce the risk of accidents.

Unfortunately, if you need to tow ultra-heavy trailers or huge machines like boats from time to time, you should choose an SUV instead of a crossover. SUV is also the ideal one for you if you’re living in an area surrounded by rough terrain. You can’t easily find a crossover with a hi-tech AWD. You may have to spend so much time looking for the right crossover for remote locations.

Final Words – Is a Jeep an SUV?

Establishing an accurate comparison between sport utility vehicles and Jeeps doesn’t make sense because of overlapping factors. First of all, SUVs come in various 2WD and 4WD models. Next, Jeep is just a general term for vehicles that look and function like the first model by Ford and Willys. Lastly, most Jeeps are 4×4, making them SUVs.

The only difference we can get from the facts we’ve shared is that SUVs and Jeeps have distinct styles in general. SUVs mostly have a modern, urban look while Jeeps will always appear more rugged and cool. Many SUVs are powerful and durable enough for off-road use, but Jeeps have the oomph you need to enjoy the whole experience.

If you want something smaller than SUVs and Jeeps yet still spacious enough for cargo and more passengers, crossovers are good options.