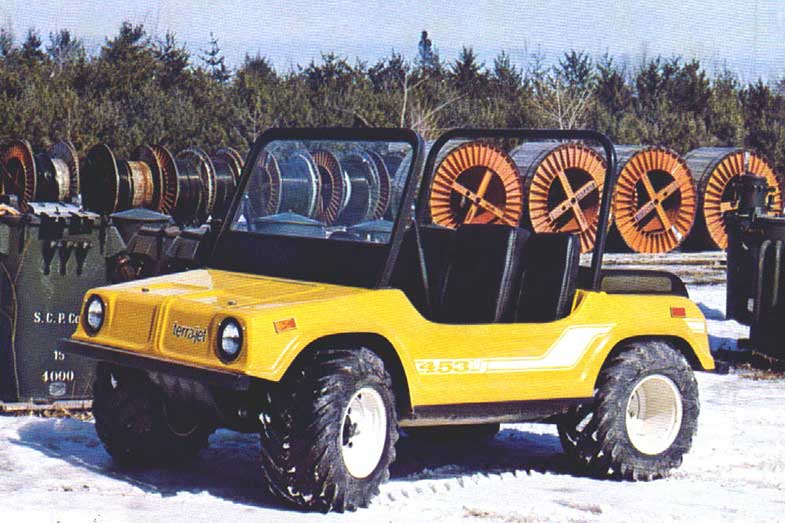 Long before the Honda ATC90 came to the U.S, Amphibious All-Terrain Vehicles (AATVs) were used for trail riding. Vintage manufacturers such as JGR Gunsport, Allis-Chalmers, and Sperry-Rand built steel-framed, fiberglass-bodied six-wheelers with tractor-type engines that could paddle through water. Shortly after the successful launch of the Jiger in 1961, smaller Canadian companies followed suit with their version of these floating vehicles. For Terra Jet, it was the Terra Jet ATV, released to the public in 1971.

The Terra Jet ATV was a series of four- to eight-wheeled amphibious vehicles produced in the 1970s and 1980s. This floater featured front-wheel steering, a top speed of up to 30 mph, and an electric start system. It was durable, handy, and favored for its industrial and off-road use.

Today, these prized possessions can be found in homes, on Craigslist, and through online auctions. Avid owners still get to ride these amphi-wheelers through mud, trails, and dunes. Interested to know how capable these vintage floaters are? Keep reading to learn more.

What Is a Terra Jet?

The Terra Jet is one of the many AATVs that travels on low-pressure balloon tires intended for multiple riders. It was produced a decade before consumers knew the existence of three- and four-wheelers. Unlike the sport and utility ATVs now, it had no suspension and could only go 25-30 mph on trails (and even less on water). Differential steering, similar to a tracked vehicle, provided directional control in place of 2WD/4WD options. It had a boxy, military-jeep look and very little to no creature comforts – quite laughable in today’s standards. But despite being limited in speed and configuration, the Terra Jet ATV (or TJ) was well-loved by its patrons.

Canada is the birthplace of the Terra Jet ATV. Terra Jet Inc. originally manufactured the AATV in 1969. It was released in the U.S. in the 1970s, and its entire production moved to Innis, Louisiana in 1994. Initially, the engineer who conceptualized the TJ intended its use for hunting trips in the Canadian Rockies. But households soon discovered that it was great for riding through wooded trails and in the snow. Due to its simplicity and multi-functional characteristics, it eventually became a preference for recreation and farm work.

The manufacturer of the Terra Jet released trim packages between 1971 and the late ’80s. The very first model was the Terra Jet 400E, launched in the U.S. from 1971 to 1973. Then the Terra Jet 503E followed. These two versions are easily recognizable due to their British roadster-style bodywork, which is different from the other versions’ boxy aesthetic. The TJ 503, in particular, had a lengthier front bumper compared to other trims due to its gas tank being at the front. Conversely, the 400E was the most powerful of the lot, with its 399-cc, two-stroke dual-cylinder Kohler engine spewing 27 hp.

Check out this video by ShawwnCFarm as he picks up a Terra Jet 400E restoration:

In the early ’80s, these next three packages launched almost simultaneously: the street-legal Terra Jet 453 TE, the Terra Jet VA6, and Terra Jet VA618. The 453 TE and VA6 initially had the same Tecumseh – OH160 engine, while either a Kohler or Ruggerini diesel engine powered the VA618. The VA6 had three classes – two under 500-cc and one 700-cc, while the VA618 had two versions that were both above 750-cc and sported six wheels. All these trims had a horsepower ranging from 10-20 ponies.

The last two trims are also diesel-fed four-wheelers, namely the Terra Jet DV860 and the Terra Jet DV430. These versions are more work-prepped than the others, with low front-end bumpers where you can attach a winch, a snow-plow, or a mini forklift. Both of these share the same squared aesthetic as with the majority of the TJ models. Unfortunately, there is very little information posted online about the specs of these last two vehicles.

These videos by Big Lobster Productions and PowerModz show a 1973 Terra Jet 503E being given a test drive and how well it performs on wooded trails, slow-crawling sections, and snow:

Now that you know the TJ’s specs, let’s look at the competition and what they offer:

Argo – Founded in 1962 as Ontario Drive and Gear (ODG) Limited, this Canadian manufacturer offers 6×6 and 8×8 AATVs and ATVs. Interestingly, the company developed and manufactured the transmission for the Amphicat and was ahead of Terra Jet in the production of 8×8 amphibious vehicles. Its most successful product was the Conquest, first launched in 1993.

Hydratrek – This American company only started the AATV business in 2004. Initially, the firm intended its AATVs for hunting and commercial use. But after Hurricane Katrina, Hydratek saw the potential of its 6×6 and 8×8 tanks as rescue vehicles. Their most technologically advanced vehicle is the Land Tamer – SMSS, currently used for military purposes.

Gibbs – Gibbs Technologies Limited is a company based in Warwickshire and founded in 1998. They provide commercial, physical, and biological research and development and develop high-speed amphibians (HSAs) for consumer, commercial, and military use. At present, the company is very well-known for its Quadski series – an AATV that transforms into a watercraft when in water.

Mudd-Ox – After a decade of testing hydrostatics and engine options with utility companies and rental fleets, this Indiana-based company launched the Mudd-Ox Vengeance 6×6 in 2008. The firm currently has three models – all heavily industrialized and designed predominantly for military use. Its AATVs boast of Kubota gas EFI engine, hydrostatic pumps, and massive hauling capacity.

Recreatives – This company is one of the few AATV producers who have held their front like Terra Jet. Their purchase of the T-20 Skid Steer Transmission system paved the way for chief enhancements reflected in its current product line. Their most popular creation to date is the Max, first produced in 1969.

The rest of the big players back in the day, like Attex, had to close down due to the 1973 U.S. oil crisis and rights purchase of the BorgWarner T-20 transmission by Recreatives Industries and Hustler Corporation. Some of the smaller manufacturers worldwide who joined the AATV bandwagon also contributed to the bad reputation and decline in these amphibious vehicles’ sales and popularity due to low-grade plastics and design flaws.

Anyone who gets a Terra Jet ATV will most likely turn it into a build project. For the benefit of budding mechanics, here the most common parts that you can upgrade to bring out TJ’s full performance off-pavement:

Between the boxy aesthetic and the mini Corvette-looking one (only available for the 400E and 503E trims), go for the former. This is because the latter has a bad design for the steering rod that goes into the body. Not to mention that the Corvette body is fubsy in the water and can only handle short water crossings (less than two feet).

Check out this video on how to repower a Terra Jet 453 TE:

Terra-Jet U.S.A. is one of the pioneers of amphibious vehicles and is the maker of Terra Jet ATV. The American manufacturer and importer began its journey in Drummondville, Quebec, in 1969, with vintage greats like Attex, JGR Gunsport, and Allis-Chalmers. The firm has expanded to Turkey, South Africa, Australia, Taiwan, Guatemala, France, Cambodia, Germany, England, Chile, and Mexico. Currently, 26 dealers in 13 U.S. states offer service and replacement parts for Terra Jet vehicles.

Terra Jet ATV is perhaps, the only vehicle of its kind that has stood its ground and stuck with old-fashioned four-stroke engines, old-school drivetrain system, and trackless wheels and tires. If you’re looking for a technically advanced, heavy-duty wheeler, the Terra Jet may be a bit left behind. Otherwise, it is a cheaper option for a project vehicle that guarantees to deliver off-roading fun.