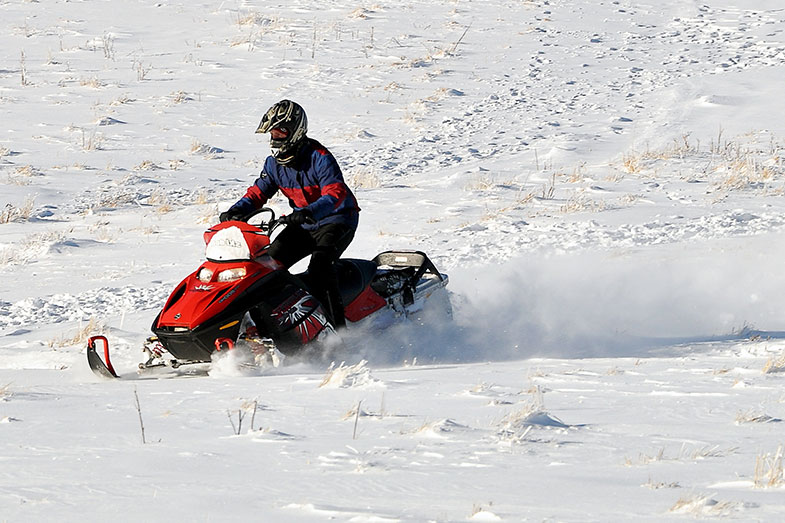 Snowmobiles are great for getting through the snow quickly. They use large gears to power their tracks and accelerate forward. If you’re interested in purchasing a snowmobile or already have one, you may be wondering how fast they can go.

How fast do snowmobiles go? While the average speed is around 100 mph, high-powered snowmobiles can get up to 150 mph. There are also racing snowmobiles that can get up to 200 mph. Top speed depends on several factors, such as model, weight, and modifications.

Top brands, such as Yamaha, Polaris, and Ski-Doo, produce some of the fastest snowmobiles on the market. For example, the Ski-Doo MXZ X 850 has a top speed of 128 mph.

Snowmobiles for beginners usually range from 80 mph to 100 mph. They’re also good for work if you don’t need to travel far distances. The Arctic Cat Sno Pro 500 is a good example of an agile sled that performs well at lower speeds.

Many factors affect top speed. They include the following:

The type of terrain makes a big difference to snowmobile speed. You will likely go faster on ice, while deep snow will slow you down. There are even riders who test their sled on water. These are usually done with high horsepower snowmobiles.

Check out this video by VIDSTORM, that shows some of the fastest snowmobiles out there. With turbo and jet engine speed, these sleds zoom over snow, water, grass, and asphalt.

Snowmobile grass drags are also quite popular, where riders take to the track to compete in numerous events. Grass drags are usually held on race tracks covered by grass or dirt, but that’s no slowing these machines down. Snowmobiles get up to 150 mph during these races.

Engines run better at low temperatures. The cooler the air, the denser it will be for your engine. The cold increases the power of your vehicle. If you are going for a 0-60 mph run, you need to make sure that you have enough room to brake. Usually, manufacturers do not include speed information in the specs. Below are some snowmobile common brands and models with their corresponding top speeds:

The 20th century was an era of innovation, and one of the products brought by the brightest minds of this period is a vehicle manufactured to slide on ice; the fast snowmobile. Harold Kalenze was the pioneer in this product of engineering. His creativity manifested into a vehicle propeller that made people ride on ice.

In 1911, the vehicle already had a steering wheel, and it could seat up to two persons. Four years later, Ray Muscott also got patented for his motor sleigh, an improved vehicle version. This one had rear tracks as well as front skis for better navigation during snowy weather. Snowmobiles were previously called “Snowflyers.”

Snowflyers were a product of creativity. The undercarriage was replaced with tracks and skis. The downside was that it had considerable safety concerns, which lacked proper performance because of its bulky nature. This machine had gradually evolved in horsepower, design, and engineering over time. Over the years, snowmobiles became faster as they improved.

These vehicles were still a work in progress when there was a high demand for the vehicle. It was not until 1935 when Joseph Bombardier redefined the first snowmobile and changed the landscape.

Joseph Bombardier was the pioneer on the assemblage and testing of the first official snowmobile. This invention was the first made-for-winter vehicle, completely steered only with the use of skis. This device, though, only had about ten horsepower. Further issues concerning the first snowmobiles included maneuverability, discomforting seat angles, and substandard tracks or skis when encountered with rough terrains.

Bombardier succeeded in testing the prototype, and it was inevitably bound to appeal to the market. Soon, they rebranded it and called it Ski Dog. It was then launched in 1959. One interesting detail about this story is how it got its modern-day brand, Ski-Doo.

Interestingly, there was a typo in printing, and the brand name was accidentally changed. Soon, it garnered popularity in Canada, where the brand took off and skyrocketed in sales. A lot of things have been polished from the previous Bombardier models to adapt to modern changes.

It was not an easy or accessible thing to do in cross country transportation in the early 20th century. Due to this, the invention and modification of the first snowmobiles or snow vehicles resulted. The earliest models ran on ten horsepower, and these vehicles were able to run at a moderate speed.

Today, snowmobiles can have up to 200hps. This development was not an innovation easily made. As these machines require multiple and various components to work, you cannot say that it is all a product of one man. For example, in 1910, Igor Sikorsky built the Aerosani, a vehicle used by the Soviet Army during World War II and the Winter War.

Today’s snowmobile had a prototype developed by Carl Eliasson, the father of today’s snowmobile. He put together as many as 40 snowmobiles, and it got patented in 1927. However, when he received an order from Finland requesting 200 snowmobiles, he had to sell the patent. This engine had long front skis, a long sled, and a single-track propeller.

The Who, When, and Where of Snowmobile Use

The northern countries experience the regular or occasional privilege of riding a snowmobile. In Iceland and other snow countries, snowmobiling is mainly recreational, done as a hobby, or a way to bond with family and friends. It is an outdoor activity availed by individuals who like to ride snowy and bumpy terrains.

Before, the snowmobile was used to deliver mails, haul cargo, and transportation in the rural areas and nearly inaccessible areas. Nowadays, it still functions for recreation or service work, especially on glaciers, frozen lakes, and other snowy roads.

Snowmobiling now has also become a serious winter sport and not just a hobby or a winter activity. In the ‘60s and ‘70s, the machines eventually expanded to sports enthusiasts.

By then, much lighter frames and engines were introduced to the public. Its functionalities were so popular that other manufacturers started introducing versions of their own. By the 1970s, there were around 100 manufacturing companies that made over 200 million machines to be sold for the next three years.

Parts of a Modern Snowmobile

Over the years since its first appearance, the components of a snowmobile have changed. Some of these have contributed to speed and overall performance. We’ve listed what a common snowmobile has nowadays and to help you better understand your winter machine.

These act as your stabilizer and steering for when you drive and is your primary connection to the vehicle.

This part is the one powering the drive shaft, as well as the rubber track that moves you forward in the snow. Once you squeeze the throttle lever on the handlebars, it feeds fuel to the engine.

Although this vehicle does not have doors or windows, the windshield protects you from incoming winds, snow, ice, and debris. This also makes the machine front aerodynamic.

Like any other vehicle, snowmobiles have headlights. These are to illuminate the path ahead and to make you visible to other snowmobile riders. Even when it’s daytime, these should be left to maintain urgency, especially in areas where light is limited.

The hood protects and covers the engine as well as the other internal parts of the machine. You should always make sure that the hood is popped. You should also check its engine before going on any trip as a good precaution.

The engine is the heart of the machine. Two styles were made to be available, which are the four-stroke and the two-stroke. As much as possible, regular repairs should be done by a qualified mechanic, as maintenance of this device can be critical.

This is the bottom of the chassis (framework support), and it helps in different ways. This is what keeps the vehicle “floats” even in deep snow, and it also protects the engine as well as other core components to reduce side motion.

Just like car wheels, the snowmobile tracks have to be suspended to propel forward. This is what holds the tracks on the snow when moving. It also absorbs the shock from bumps and objects.

If you love to get things done yourself, then you can customize certain parts of the vehicle, especially to help with your top speed goal. One part is the snowmobile tracks, which can undoubtedly have a significant impact on your speed. These tracks were usually made of rubber as it provided excellent traction on snow or ice, which are slippery surfaces. Rubber also prevented the vehicle from slipping and sliding.

Over time, however, modern tracks now compose of Kevlar composites. This product’s love comes from its very rigid and aggressive angles, giving it almost a perfect grip on any level of rough terrain, allowing you to maintain most of your top speed.

This panel displays or tells you all of the information you need to know about speed, tachometer, and warning lights. It works just like the dashboard of a car.

Conclusion – How Fast Do Snowmobiles Go?

Snowmobile speed can range from 80 mph to 200 mph, depending on many factors. Beginner sleds are usually slower, while racing snowmobiles are the fastest. Most modern snowmobiles today are high-performance, and can reach speeds of 150 mph and more. Your top speed will also depend on your skill level as a rider. You can also add modifications, such as a performance exhaust.