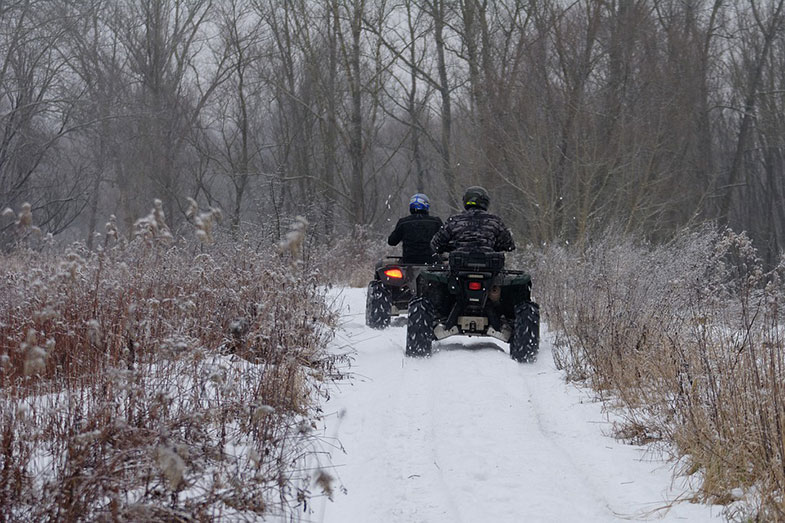 Michigan is known for its vast number of natural trails, making it a popular destination for adventure seekers. And what better way to explore the trails by riding an all-terrain vehicle (ATV). Since Michigan has a lot of exciting snowmobile trails, is it okay if you try those paths with your ATV?

Why would ATVs not be allowed on snowmobile trails?

ATVs can easily alter the terrain and damage the trails, especially on soft snow.

Fortunately, some snowy trails are groomed or covered by firm snow. They’re usually the ones reserved for both snowmobiles and ATVs.

Despite the trail being open for ATVs, always monitor the real-time weather forecast. The amount of snow or ice may suddenly get worse, which can cause problems for your vehicle.

Another factor for Michigan DNR to ban ATVs from most snowmobile trails is safety. A lot of trails have snowdrifts, which may put you in the risk of danger. You might get stuck and even hurt yourself in the process.

As a responsible adventurer, keep up on the laws that protect Michigan trails to avoid breaking them and putting yourself in a huge inconvenience.

Now that we’re aware of some of the reasons why ATVs are not allowed on snowmobile trails, should we expect the same thing from other states?

Wherever you go, snowmobile trails are bound by strict rules. Some states do allow ATVs on them as long as specific instructions are followed.

Check out the basic laws surrounding all-terrain vehicles on snowmobile trails in the following states:

Michigan and Indiana have the same set of rules for off-road vehicles on snowmobile trails. Indiana’s snowmobile trails that are off-limits for ATVs are usually covered in soft snow, too. They shouldn’t be altered by wheeled vehicles.

And, just like Michigan’s laws, ATVs in Indiana should only be driven in areas where you can use wheeled vehicles. Those areas typically have firm snow and are safer for ATV users.

The Snowmobile Trail Fund helps to provide finances for a lot of snowmobile trails. You cannot drive an ATV in those areas. Other prohibited vehicles are motorcycles, dune buggies, and 4WDs.

However, if landowners allow wheeled vehicles on their trails, there will be no conflict. Emergencies also guarantee a free pass to rescue or protect people and properties.

We’ve mentioned earlier that ATVs can ruin the terrain. Maine is undoubtedly aware since it also prohibits ATVs on most snowy trails to avoid damage to hidden vegetation on alpine tundras, wetlands, and freshwater ecosystems.

Luckily, there is still a way to ride your ATV. In Maine, the authorities can allow people to register their ATVs as snowmobiles if the vehicle has tracks instead of the usual wheels and tires. As long as there are no wheels that can damage terrain, you can ride along snowmobile trails.

Similar to Maine, ATVs can be used on New Hampshire’s snowmobile trails if their wheels are removed. Skis, cleats, or tracks should be installed instead of the wheels.

However, you still need to register your modified ATV to change it into a snowmobile legally. Also, your ATV must not be wider than 54 inches, even with its new tracks. It should also be lighter than 1,200 lbs.

Don’t worry about losing the credibility of your ATV if it’s registered as an off-highway recreational vehicle (OHRV); you can use both licenses in New Hampshire. Simply put, your ATV can be an OHRV and a snowmobile at the same time.

It won’t matter if you’re using a winter ATV; a lot of snowmobile trails in Wisconsin automatically prohibit all ATVs. But, if the landowner agrees, you’re free to explore the area.

We also have bad news about installing tracks on your ATV to legally operate it as a snowmobile. In Wisconsin, that will instantly remove the nature of your vehicle as an ATV. If authorities see an ATV with tracks, they won’t consider it as an ATV anymore unless you install the wheels again.

What Are ORV Trails?

ORV simply means an off-road vehicle. It can be used even if there’s no distinct path in sight. It’s a reliable machine for riding over any terrain. ATVs are technically considered ORVs, so they’re welcome on ORV trails.

There are so many ORV trails in Michigan, so let’s focus on five interesting options you might like.

Located in Atlanta, Michigan, this trail has a length of 79.3 miles and a road width of 50 inches. It’s located in the counties of Presque Isle and Montmorency, which allow ATVs on county roads. Forest roads are strictly off-limits, though.

This trail has direct access to Clear Lake State Park and Jackson Lake State Forest Campground. There’s access for fuel and food in a facility located at M-33.

Furthermore, the staging area is located in M-33 near the DNR Atlanta Office. The trail is popular, so expect some traffic along the trail. This route also has several loop options, so it’s up to the rider on how to maximize the trail route.

Meanwhile, the terrain varies from flat and sandy to rough and rocky surfaces. Also, the vegetation changes from jack pine scrubs to mature hardwood.

This trail, located in the counties of Cheboygan and Presque Isle in the state of Michigan, has a length of 19 miles and a width of 40 inches. The said location also allows ATVs on the county roads. Forest roads are still off-limits.

Since this is not a popular trail, expect little to no traffic. The roads are best for motorcycles, and most of them are even ideal for ATVs. The terrain on the north side is uneven while the south side is sandy and flat.

Just like what the Atlanta trail has, the vegetation is mostly pine scrubs and hardwood. Fuel and food can be accessed on Bluffs Resort.

With a length of 17.1 miles and a road width of 50 inches, this Otsego County trail is connected to the Big Bear ORV trail. It also laces with the North Branch ORV route.

The terrain on the south side is generally sandy and flat while the north side is hard-packed. The vegetation consists mostly of pine scrubs and hardwood as usual. As for the fuel and food access, it’s on the adjacent M-32.

Situated in Roscommon County and bound by Ogemaw County, this trail is 63.7 miles long and 50 inches wide. Both Roscommon and Ogemaw counties allow ATVs to use county roads. As expected, the forest roads are strictly off-limits.

This trail is highly popular since it connects to St. Helen’s motorsports, Denton, Geels, and Ogemaw Hills ORV trails. Expect more traffic there.

Additionally, this trail has multiple loop options. Its terrain can be sandy and flat or rolling. The vegetation there is mostly various kinds of hardwood and pine scrubs. Also, fuel and food are accessed on the south side of the trail.

This trail has a length of 35.4 miles and a road width of 50 inches. Unlike other counties, Luce County allows access to both county and forest roads. That’s why this trail has direct access to the Pike Lake State Forest Campground and connects to the Pine Ridge ORV trail.

Expect some traffic on this trail since it’s quite popular. It’s adjacent to the lake and several parks. Fuel can be accessed on Rainbow lodge on the northeastern side of the trail.

Interestingly, the terrain is mostly sandy since it’s near Lake Superior. Despite the beach-like appearance of some areas, the vegetation remains to have both pine and hardwood in massive amounts.

Generally speaking, you can’t ride an ATV on Michigan’s snowmobile trails. It’s a matter of protection for the terrain and, more importantly, your safety. It’s your responsibility to find out if a snowmobile trail allows ATVs.

Some states like Maine and New Hampshire can permit ATVs to enter snowmobile trails. You just have to register yours as a snowmobile after removing its wheels and replacing them with tracks, skis, or cleats.